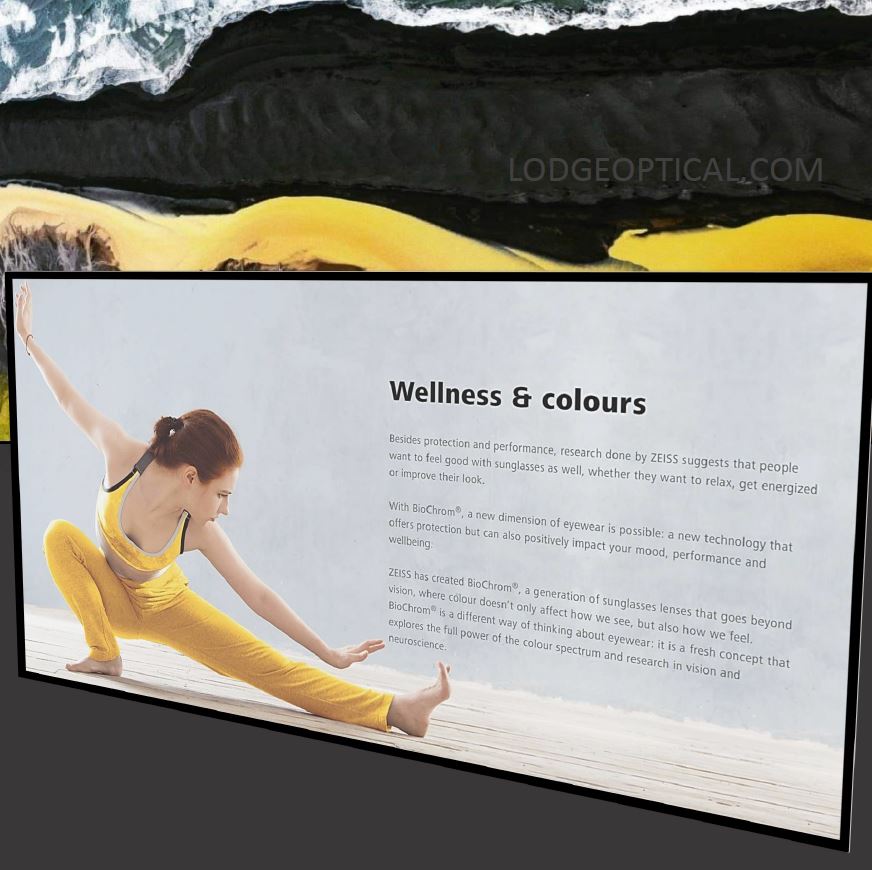 When colors go beyond your vision-Color allows us to recognize objects and it facilitates our visual memory. Scientific evidence suggests that color also has a deeper effect that goes beyond vision, as it is connected to how we feel. In the eyewear market, tinted sunglasses lenses are normally used to filter the harmful effects of sun light, enhance contrast and offer better vision.

Besides protection and performance, research done by ZEISS suggests that people want to feel good with sunglasses as well, whether they want to relax, get energized or improve their look. With BioChrom®, a new dimension of eyewear is possible: a new technology that offers protection but can also positively impact your mood, performance and wellbeing.

A different way of thinking about eyewear! Coming soon! 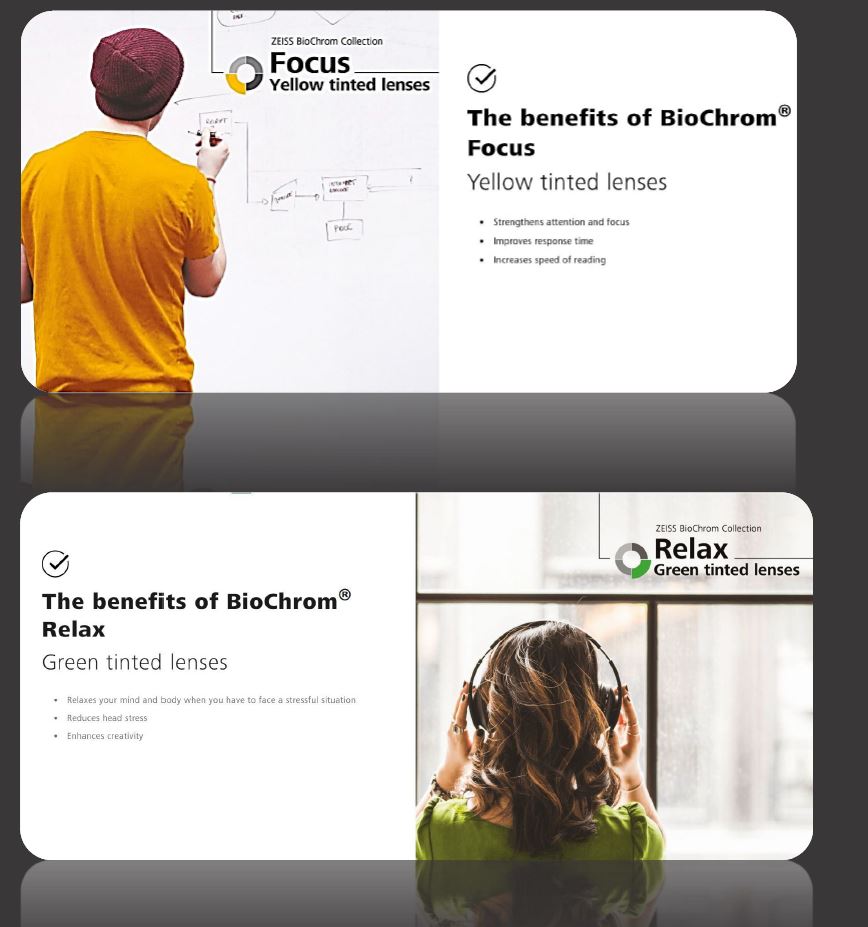 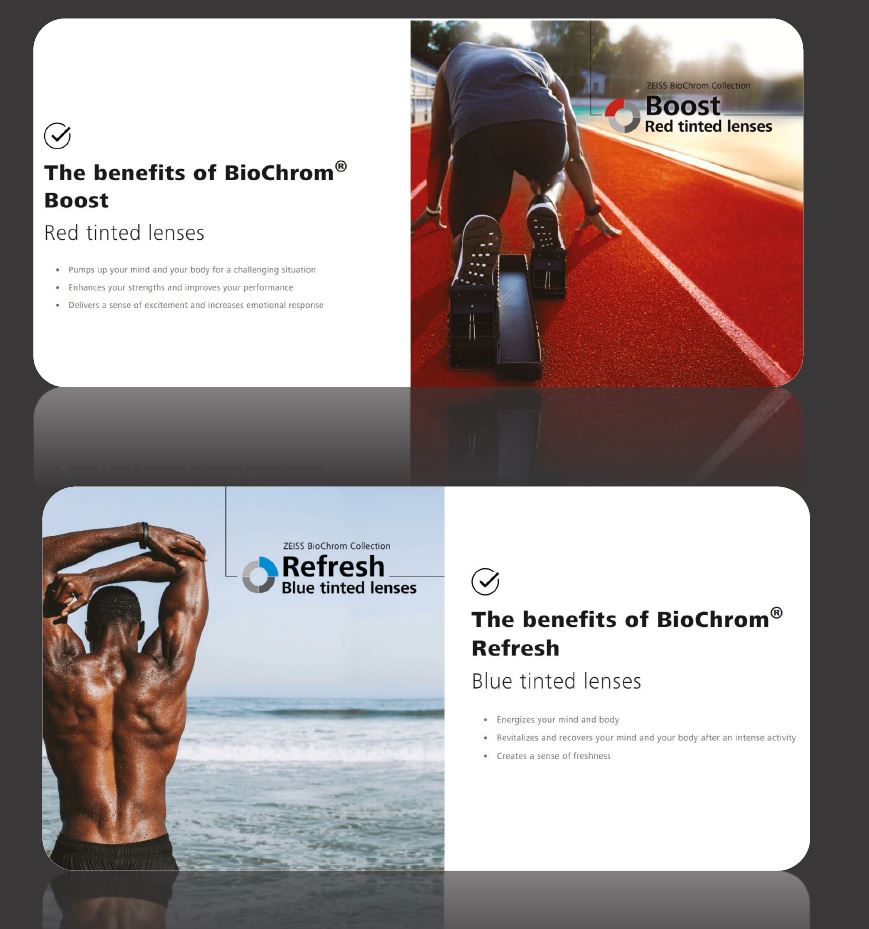 How are migraine glasses different from regular sunglasses?

Many people with migraines experience photophobia, an abnormal sensitivity to light. Photophobia can occur both during a migraine attack and between attacks, causing both natural and manufactured light to cause pain and discomfort.

For some people, light may act as a trigger for a migraine attack.

Photophobia can cause people to avoid going outside on sunny days and seek shelter in darkened rooms. However, light isn’t always avoidable.

One of the ways some people with migraine combat photophobia and prevent migraine attacks is by wearing tinted glasses.

Researchers have found that only certain wavelengths of light causes photophobia, which makes finding migraine glasses that filter these specific wavelengths very important.

Currently, the FL-41 tint is the only known option that specifically targets this light without being too dark like sunglasses.

Outdoor FL-41 lenses are also available and offer more protection than regular sunglasses. However, sunglasses are designed to block the bright sunlight, and while they can be worn indoors, prolonged wear of sunglasses indoors may actually cause the eyes to become more sensitive to light, as the eyes adapt to the darker shading of sunglasses. 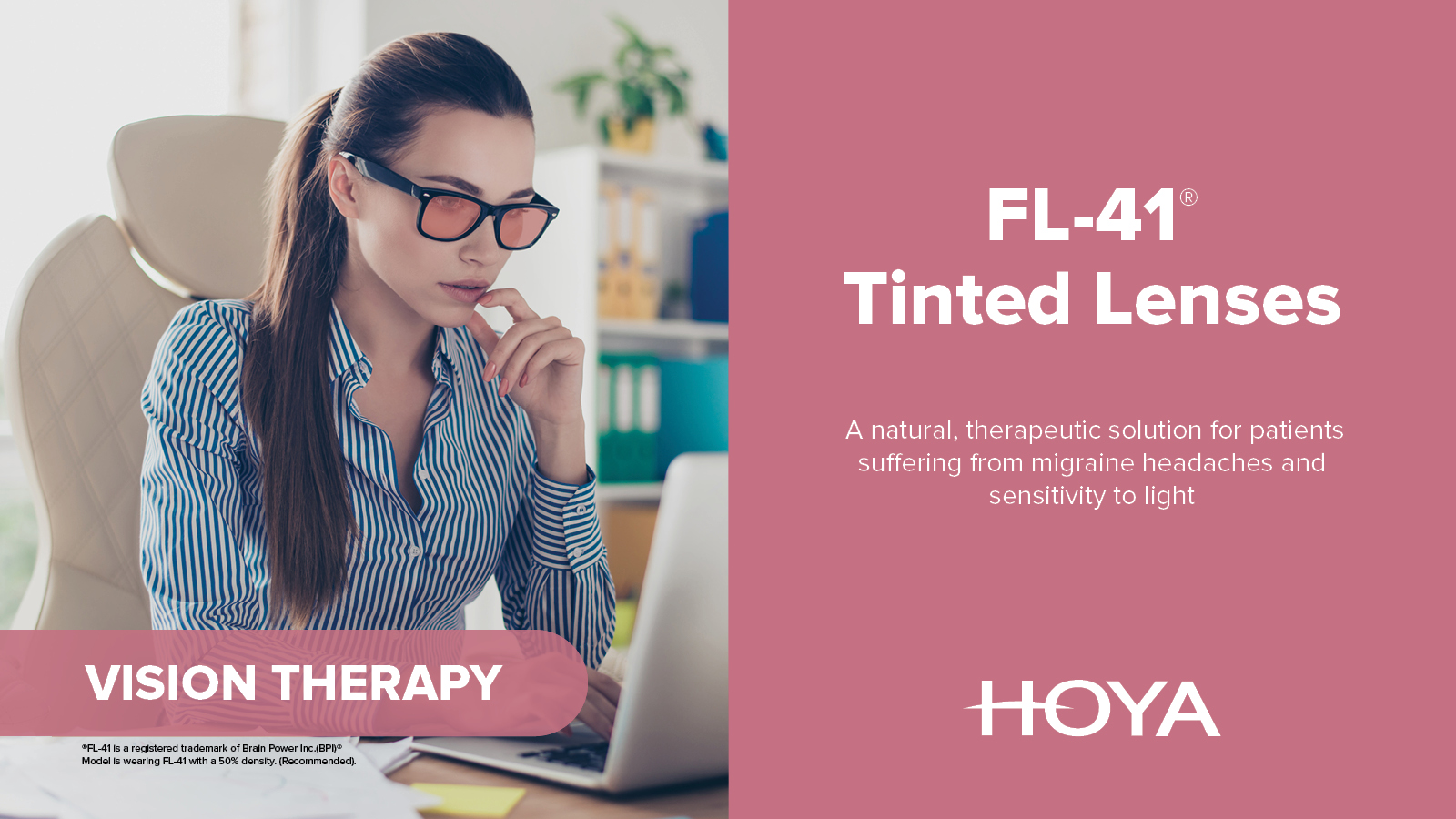 What research has been done on migraine glasses? Several clinical trials have studied the effect of tinted glasses in people with migraine. One study conducted in 2002 compared glasses that filtered conventional white light with a control pair of glasses that were just tinted but didn’t filter light. The participants used the different glasses and recorded the frequency of their migraine attacks in a headache diary. The frequency of attacks was marginally lower when the optimal glasses that filtered out light were used.

Based on published research, the best tint option for migraine and photophobia relief is a filter capable of blocking the critical 480-520nm wavelengths. 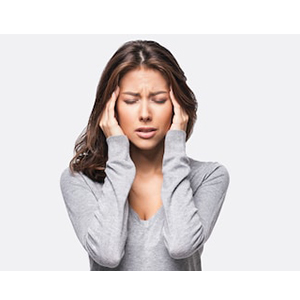 WARNING: HEADACHES, MIGRAINES, AND OTHER PHYSICAL SYMPTOMS MAY BE DUE TO A MEDICAL CONDITION. CHECK WITH YOUR PHYSICIAN TO RULE OUT ANY POSSIBLE MEDICAL CAUSES. 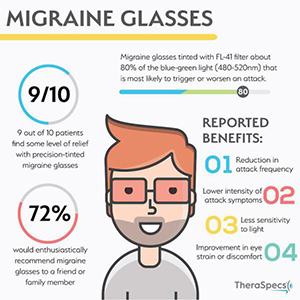 Does certain light trigger or worsen photophobia? The answer is a resounding yes! Fluorescent lighting, sunlight, and computer or mobile device screens can make things worse for someone with light sensitive eyes. Fluorescent lights have been shown to double incidences of headaches and migraine attacks among office workers, and they are repeatedly cited as an issue for patients with a history of traumatic brain injury.

Not all wavelengths of light cause the same types of pain. Some wavelengths, particularly in the blue part of the spectrum, irritate nerves in the eye and brain and trigger pain. And these wavelengths are everywhere in natural and artificial light. Fluorescent lights are particularly bad because of how the brain perceives them.

The Fluorescent Light Nightmare: Fluorescent lights make many people feel sick, because they pulse faster than you can consciously see but the brain still acknowledges this pulsing as rapid signals from the nerves of the eye. Rapidly repeating patterns, such as blinking lights or even stripes of the right width, can cause headaches, eyestrain, and nausea. For some people, it can even trigger migraines. Fluorescent lights can irritate our brains without us even consciously aware of it, and the use of fluorescent lighting is growing, exposing us to more and more pulsing. As scary as this is for us, there’s good news. Fluorescent pulsing is most intense at certain wavelengths. That means if you filter those specific wavelengths, you can filter the pulsing. Information Source-theraspecs.com